Adam Larsen is an internationally-known

PowerSchool administrator, speaker, developer, analyst, and trainer.  He has blended a background as a web developer and school psychologist into a single position where he manages the collection and analysis of data, coaches principals in the use of student information, and develops tools for tracking and reporting student progress for a medium-sized rural school district in the United States, about 160km  from Chicago.  Adam managed the PowerSchool implementation for this district in 2010 and continues as the chief administrator of the system today. He is also the owner and principal developer at Aurora Educational Technology, which provides PowerSchool consulting services as well as many wonderful free plugins to the PowerSchool community.

Alicia is the president of Marcia Brenner Associates, a PowerSchool implementation and support specialist company located in Madison, Wisconsin. She has a great deal of experience with helping schools get PowerSchool in place effectively and will be teaching our beginner classes at the conference.

Greg is the president and principal consultant at PSTechGroup, Inc. A former tech support manager and trainer at PowerSchool with more than a decade of PowerSchool experience, he goes back to the days in the late 90’s when what is now PowerScheduler was being developed and later integrated into the PowerSchool SIS. He has presented at numerous PSUG conferences over the years. Working with schools all over the world, Greg specializes in Scheduling, Standards, training and implementations.

Jason Springel is the PowerSchool Evangelist of Insider Screencast fame and has been assisting schools with their technology needs in a variety of roles for the past 22 years at Apple, Pearson, and PowerSchool, and uses that experience to provide guidance and leadership to help shape future product development. Jason delights in meeting and working with customers and educators at user group conferences and other events, where he has become a well-known speaker. Jason has been a fan and user of PowerSchool since 1999, and feels privileged to officially represent the product.

John is the Data Specialist for River Trails SD 26, just outside of beautiful Chicago. He has administered PowerSchool since 2001. John tries to give educators what they need to survive – and often what they want as well. He was up for Laziest Man of the Year, but didn’t send in his form. 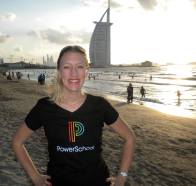 This is Romy’s eighth year in the PowerSchool world. She’s currently the Student Information Systems Specialist at the American School of Dubai and was previously PowerSchool Coordinator at Zurich International School in Switzerland. Apart from founding the European PSUG in 2012 and organizing conferences in Zurich, Valencia, Malta, and now Dubai, she also trains at the National PSUG conference in Las Vegas each summer. She contributes frequently to the online PSUG Yahoo and PowerSource forums, maintains several customizations on PowerSource Exchange, serves on PowerSchool’s Customer Advisory Board, and enjoys working closely with international schools around the world to represent their voice to PowerSchool product managers and create connections with the wider community.

A longtime sponsor of PSUG conferences, intellimedia is a Canadian consulting and software development company specializing in education services and solutions with a proven track record of helping schools optimize the value of technology investments, including PowerSchool.  Intellimedia has extensive knowledge and experience with education solutions and PowerSchool customizations. Their close relationship with PowerSchool LLC as a trusted partner integration consultant positions them to help schools and PowerSchool partners improve efficiency, enhance data driven decision-making, as well as achieve more seamless system integration. Chris Walberg will be presenting remotely on the PowerSchool API.

intellimedia is the primary sponsor for this conference and we are very grateful for their support and contributions!

Kaelon worked at a school district for 10 years prior to moving to PowerSchool. Before managing the implementation of his SIS, he helped teachers integrate technology into their curriculum and provided technology proficiency training for all of the staff and parents. He moved to PowerSchool in 2012 where he worked as an engineer for 3 years before expanding his own company, AccelaSchool, to help as many school districts as he could reach. Kaelon has given workshops at several PSUG events and he is excited to join us remotely for a session about Database Extensions and Page Fragments.

Joy has been working with K-12 districts for over 20 years. She joined Marcia Brenner Associates in 2015 to lead sales for MBA plugins for PowerSchool. Providing people with time saving solutions for managing data more efficiently is her primary goal.